Please note: This page is the content of Ancient Mind

Considering the most recent religion. Its message comes to human around fourteen hundred years ago. What was the size of universe and also the attitude of humans at that time. To the eyes of that religion, and other religions before it, Earth was limited to a twenty million square kilometre round the Mediterranean sea with boundaries in unknown places in western sides of India Central Asia, Caucasus north and south of Mediterranean sea and somewhere in Ethiopia. During six hundred years from Jesus Christ to Muhammad, individuals from Christendom had gone to expeditions further North, East and West of Europe, converted many but not all of scattered inhabitants of those regions. Earth was a lonely place in the universe inhabited by humans who were living just few miles far from the heaven above that was like a neighbourhood filled with Deity or deities and angles and familiar phenomena.

God, from heaven or Olympus or similar places, all the time was watchful of its small dominion in Levant or Hellas or small islands of Polynesia in shape of an old man or a powerful father or a parrot and in constant need of golds and sacrifice and prayers and burning scents, who was administrating those people living there with immediate contingents of angles and daemons and thunders or diseases. This was how the ancient worshippers of god(s) were thinking about the whole creation. Modern theologians, philosophers, and scientist cannot consistently integrate those ideas except to negotiate on a fragmented and mostly symbolic ways negotiating only partially. At the ancient times this consensus was gained by practising of power by one side. Even now that practice is continued, though the dictation might come from the modern science in certain regions of the world, and in certain other regions, still, it might be from the governing religion or merely from the ordinary people following a religion.

When we think about religions, we start to become inconsistent and try to reconcile it with our modern thoughts. We separate wisdom and faith as two entities; one belongs to mind - wisdom - and the other belongs to heart: religion. We say and gradually believe that we can live with such dualism. If we get a simple flu that can be managed with over the counter pain killers then it is all due to modern biochemistry, but if it is an unknown harsh flu with muscle pains we stay at bed, will have natural soups made by God-given vegetables full of natural remedies and moaning "Oh, my God!" As if God is a management mentor and gradually empowers us for delivery of new missions already done by him. Our philosophy, psychology and scientific outlook also fit in that simple attitude of flu patient.

Atheists and materialist philosophers and positivists also reason in a similar fashion that fits in that simple example, but used to refute and reject it. Scientists and philosophers of ancient times were amazed of creation of God when they were looking in night sky, seeing God has created holes in the ceiling of sky such that part of the ethereal light of heaven can penetrate for the comfort of the earth inhabitants who already had sacrificed for His altar to give them a sign of his omnipresence at night and to scare daemons. When all that replaced with a solar system and a fiery object as the Sun at its centre, again, they started to be amazed of creation of God on beholding the spectrum of elements in the sun similar to those burning in a flame in the chemistry lab. Then they started to be amazed of electrons circling in a vast emptiness around a dense nucleon. Then they were amazed about the quarks and strings. Whatever was the reason of their amazement was similarly the reason for sacrilegious people to deny any god or religion. This is how the fragmented negotiation of ancient mind reached to our contemporary and with it the idea of appearance of Messiah promised in ancient time as a saviour or son of the God or a prophet. 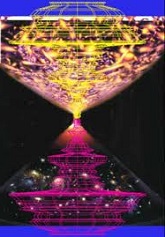 This page is maintained Bahraam Hormuz, an Iranian historian